This year Royal Enfield’s Astral Ride took a route through Zanskar. We got astride a Pine Green Himalayan to shoot a galaxy far far away.

It’s 6.55 in the morning and the sun is climbing over the tall mountains that stand like sentinels around Leh. I have just stepped off the red-eye direct flight from Bombay to Leh, which has pretty much consumed my entire night, as it took off at 4 am and check-in was two hours prior to that.

Yet, I am instantly infused with zest as soon as I drive into the courtyard of Hotel Barath. Because I see her standing there. ‘She’ is not flesh and bones, rather she is metal, plastic and rubber, amongst other things, but to me she has soul.

It’s my Tamilian Himalayan TN 07 CR 9329 – my rambunctious Rongbuk ride. The motorcycle I had ridden to where the Rongbuk Monastery stands at the base of Lady Chomolungma or Mount Everest in Tibet. My steadfast non-complaining companion as we crested 19,000 feet high passes to get there about two years ago. (Published in Autocar India, December 2019)

But I betray her and choose the new Pine Green Himalayan, a more recent (BS6) model, for this ride. It is a betrayal that will bite me at times during the days the come.

I am here in Leh for Royal Enfield’s Astral Ride 2021 wherein a group of photography enthusiasts will ride to the non-light-polluted wilderness of Zanskar to indulge in some astral photography. The time for the ride too has been chosen such that the moon will slink away soon after the sun, leaving skies dark for the brilliance of the planets and the stars.

After two days of acclimatisation and briefings about the plan for the days to come, we ride out towards Kargil – 221km away.

It is the first time that I realise that the stock BS6 is a little restrained, compared to my old Rongbuk steed. In addition to having a slight throttle response advantage, the BS4s on the ride have been also kitted out with aftermarket freeflow exhaust end cans that further that advantage and add a nice characteristic ‘thump’ that is sort of Royal Enfield’s anthem.

I remember the 9329 pushing 120kph even in the thin air of Tibet at 17,000 feet while, here in Ladakh, at 11,000 feet, even with the throttle fully wrenched open, the Pine Green’s speedo needle bounces between 80kph to 90kph. Yet it doesn’t bother me, because the crumpled topography of Ladakh means that it is the speed you carry into corners, and how strong the midrange of the engine is, is what really counts, and I can pull off the former and the Pine Green is potent in the latter.

The skill I learnt on the ride was how to corner hard on shifting sand.

The Leh-Kargil road is unblemished, grippy tarmac that the Ceats have formed a fast friendship with. As a result, I can test the limit of lean on every successive corner and am soon scraping the side of my shoe soles on sweeping corners.

There are 10 of us riding, excluding the lead and the sweep, and everyone’s on BS4s, except for another rider and me. On this tarmac day, when everyone is gunning their motorcycles with wild abandon, I am one of the tail-enders.

But the game changes the next day as we snake into the Suru Valley, which runs south from Kargil to Rangdum in Zanskar.

Today, it is no longer about speed, but more about the fantastic scenery that bursts into view the moment we cross Sankoo and urbanity disappears and is replaced by rusticity. 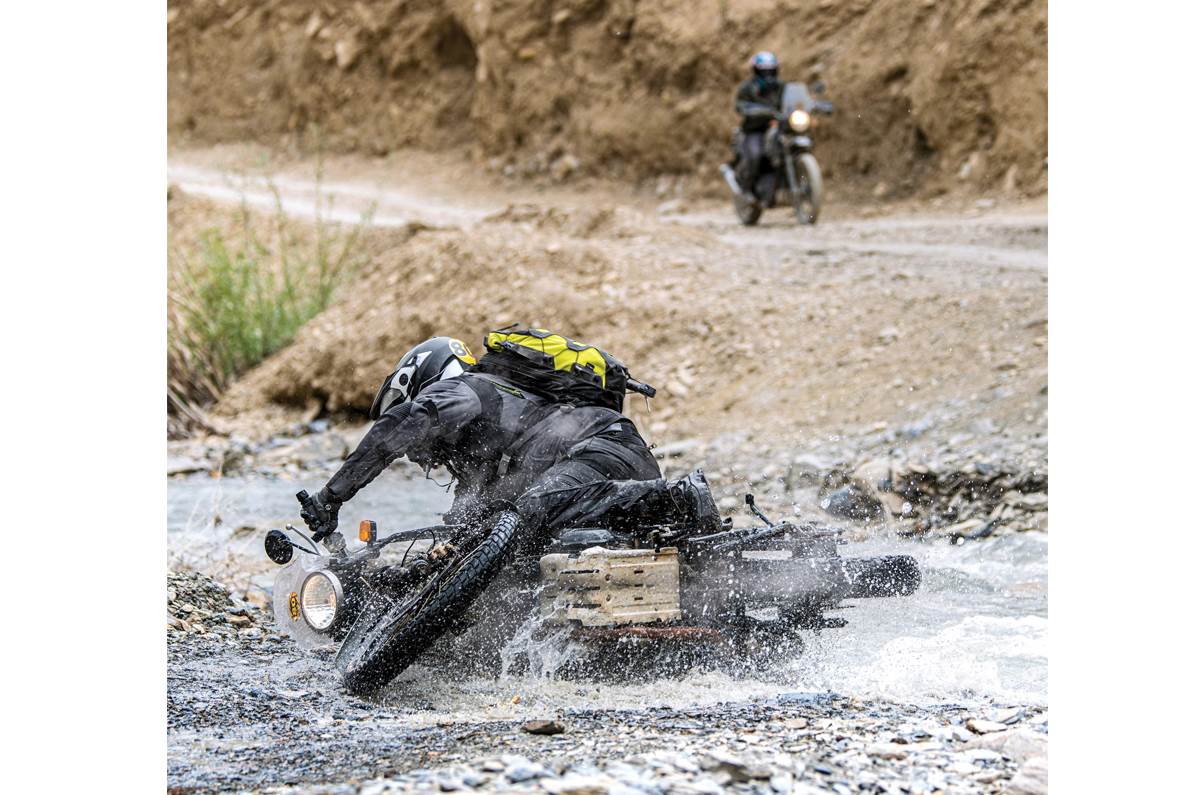 Sometimes water crossings were tricky, due to hidden rocks.

The mountains all around me seem to have grown in magnificence and stature, and soon I see Zanskar’s famous permanently white-topped twins – the Nun and Kun peaks. To my right, the Suru River is raging in the opposite direction. As I unleash horsepower towards Rangdum, this liquid bulk of glacial melt is racing towards the Skardu district of Baltistan in Pakistan where it will merge with the Indus at Nurla.

The Suru Valley is gorgeously green and as we ride through the villages of Damsna and Panikhar, children often try to high-five us by jumping on the middle of the road.

The tarmac comes to an abrupt end at the village of Parkachik, named after the big glacial mass of ice called the Parkachik Glacier that clings to the mountains above the village. 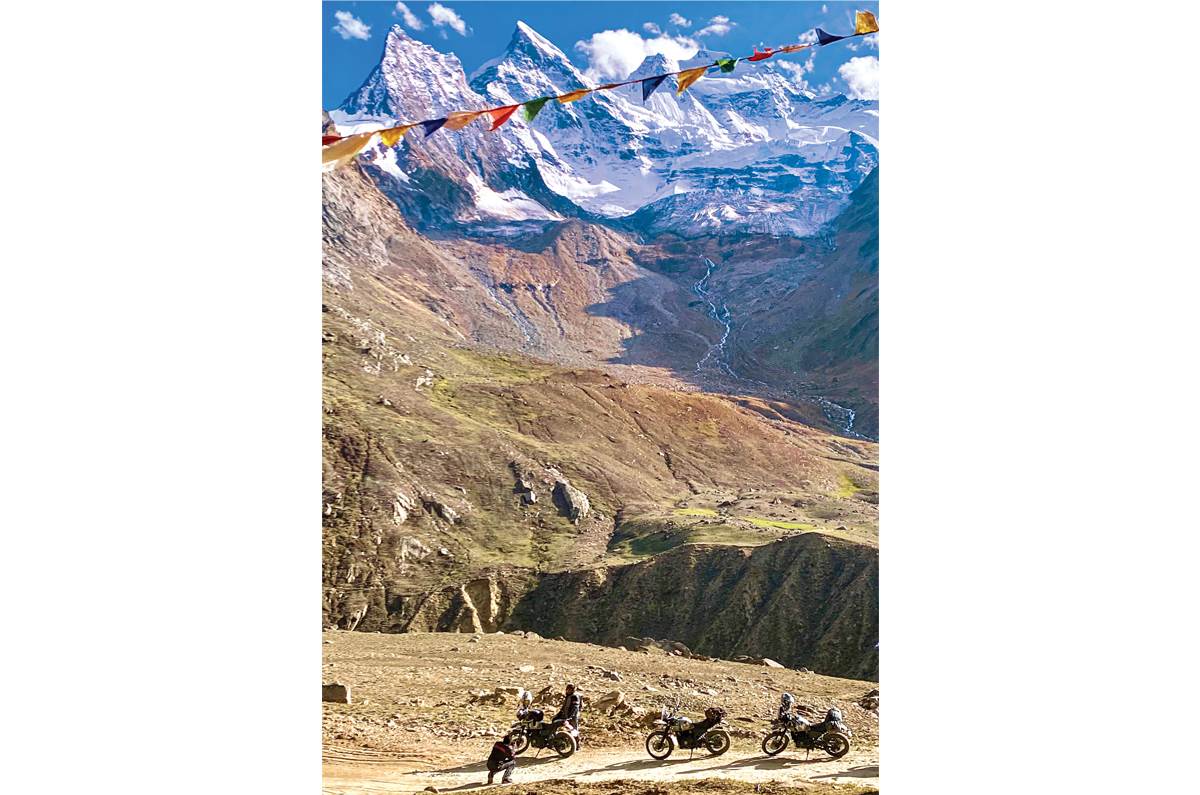 The view of the Parkachik Glacier coincided with the end of tarmac roads.

Now, with tyres kicking up dirt, black riding jackets turn gray as fine white ivory coloured dust settles on them. The knobby Ceats are good in the dirt too but still, it is quite the thrill around corners where loose gravel has accumulated. There is always a bit of slip and slide, and I come to love that ominous feeling in the pit of my stomach as I shift down into 2nd at the start of a corner and twist the throttle, which causes the rear rubber to try and tango with the terrain. I am not too bothered about being gentle on the rear brake because ABS will meter the force and the frequency of grip on the rear disc .

But a little further on a rare straight that looks invitingly smooth, I gun the bike and my front wheel hits a rock submerged in the sand, sending a shudder right up to my shoulders. And, unbeknown to me, that knocks out the speedo cable and disables the ABS. Up comes the next corner and I try to be Judah Ben Hur again, trying to carry speed into that corner, just like he did around the Colosseum in his chariot 2,000 years ago. The motorcycle starts sliding at the apex of the corner and I am trying to play chicken with friction, waiting for the rubber to find grip and stop the slide. But I shy away before that happens, stamp on the rear brake, complacent in the knowledge that the ABS has my back, but it doesn’t and, long story short, I end up on my back. It’s a slow-speed fall on soft terrain and I am well geared, so no harm done. But what I remember very well, lying prone, is staring skyward at the Parkachik Glacier and marveling at how lovely it looks – stark white against the backdrop of the deep blue sky.

Vishnu, the mechanic who’s riding shotgun in the support vehicle that carries the spares in case of breakdowns, refixes my speedo cable and I have ABS active once again. 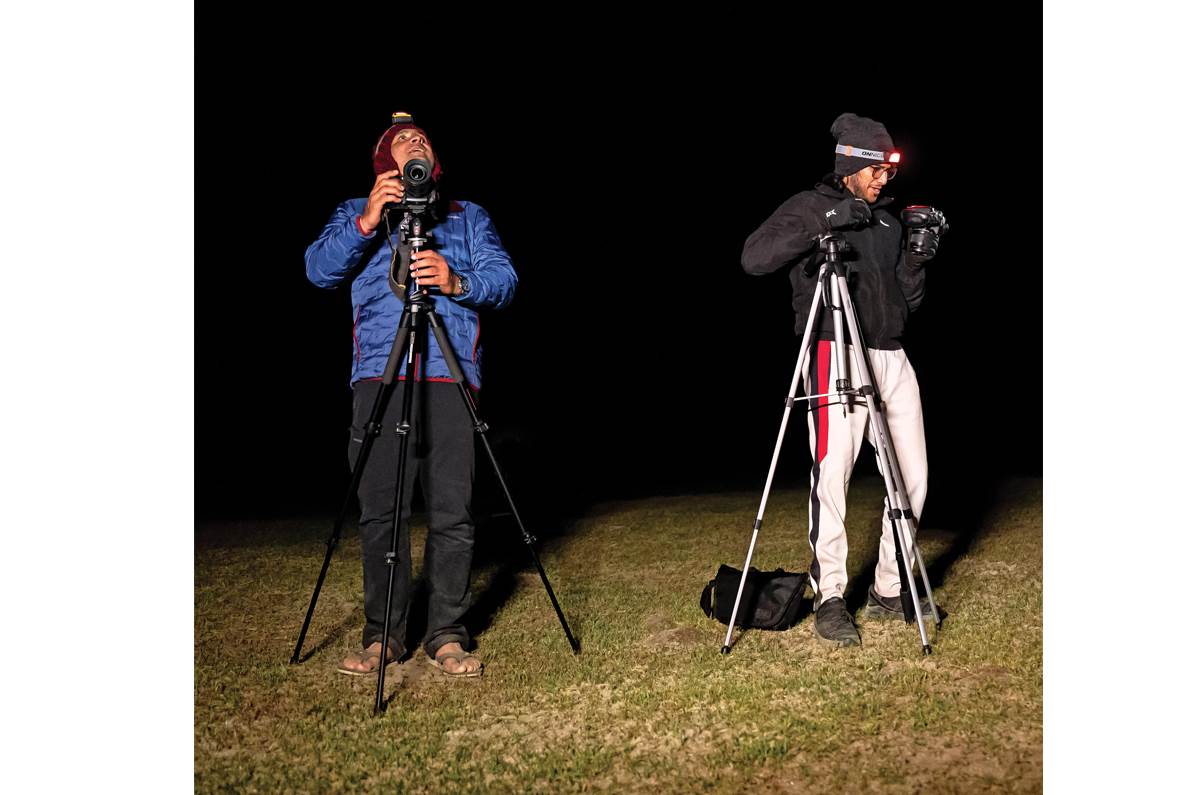 The first chance at astral photography came at Shapath

That night we camp at Shapath – a lovely green meadow by the Suru – and have our first Astral Photography session. For me, it is truly therapeutic because after years of just pulling out my phone and taking pictures, today I have the luxury of time to mount my trusty old DSLR on a tripod, set everything to manual, set parameters and shoot at leisure. I am quite amazed at how well it captures the Milky Way in all its sparkly splendour. 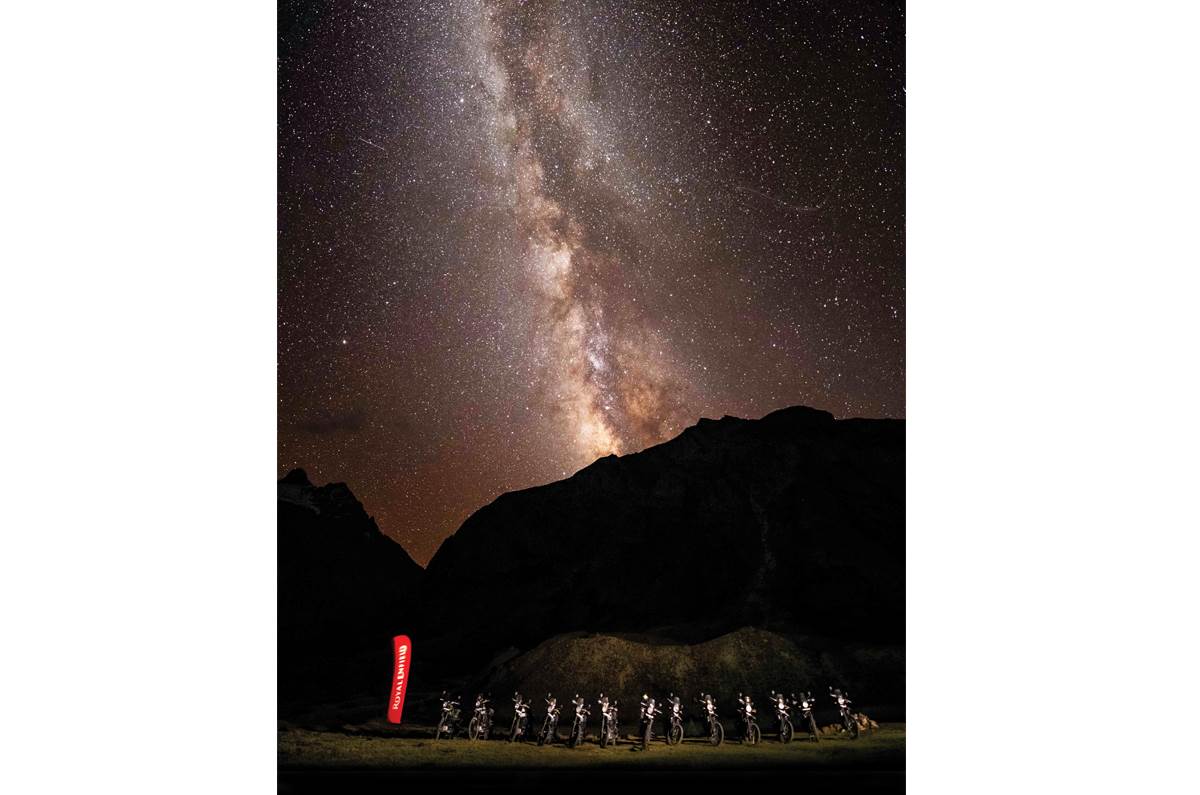 The Milky Way makes a grand appearance at the Shapath Campsite, 10km short of Rangdum.

I’d rather forget the 150km ride from Shapath to Zangla via Rangdum and Padum because it is mostly featureless with atrociously uneven surfaces. Except for the time when we crest the Penzi La pass and the huge Drang-Drung Glacier seems to just rise above the horizon like a huge lethargic python of white. Twenty three kilometres long, this tongue of snow and ice is the source of the Stod River, which would now accompany us as we rode to Padum. Close by is the Panzella Glacier, which is the source of the Suru River. The Stod, however, flows southeast and joins the Tsarap River at Padum and together these two form the Zanskar River, a tributary of the Indus. 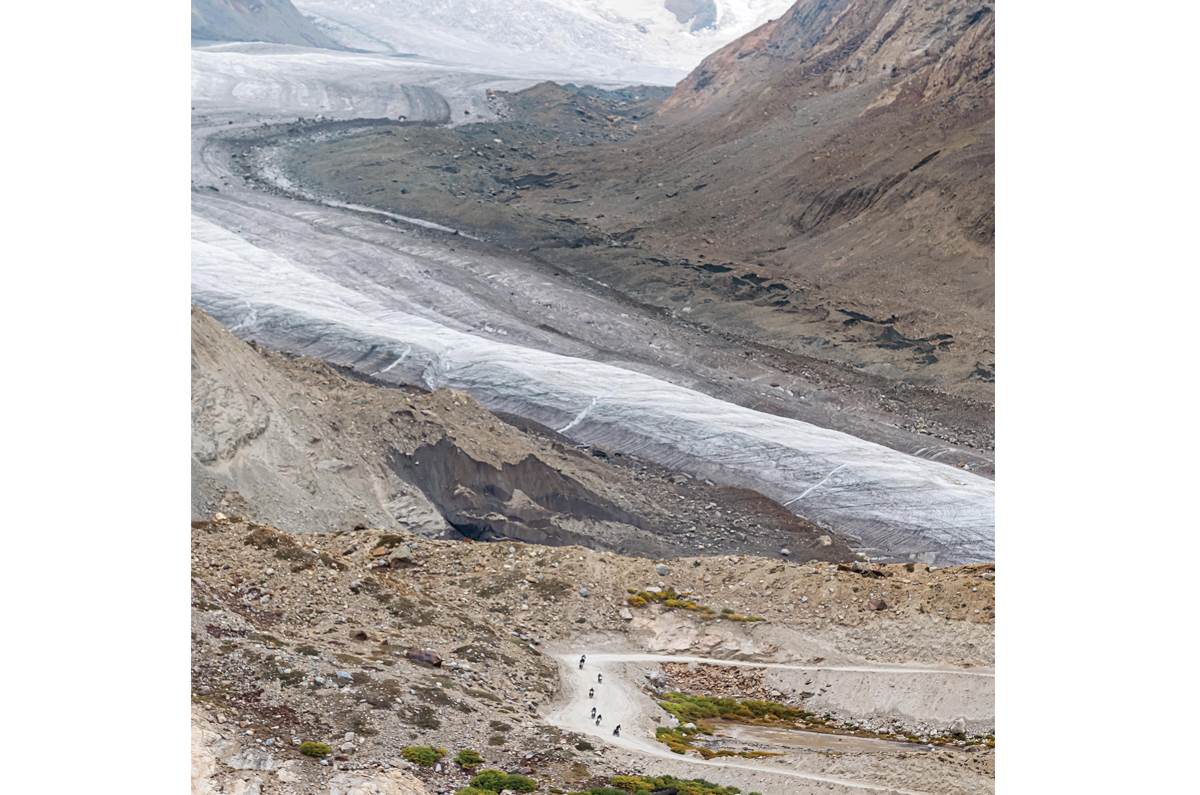 The Drang-Drung Glacier looks like the frozen white tongue of some gigantic prehistoric creature.

At Zangla, we have our second astral photography session high up at the ancient and crumbly Zangla Palace. But today the clouds have come to the party too, giving photos an ethereal kind of effect.

By far my most favourite section of the trip is the ride on the route from Zangla to Wanla over two high-altitude passes – the Singe La at 16,590 feet and the Sirsir La at 15,700 feet.

By now, I know every nuance of the Pine Green and also how to squeeze out every bit of horsepower from it. Yet, I often cast a longing eye over my Rongbuk Himalayan that is being ridden by Amit Nikam, a dermatologist from Nagpur. My motorcycle’s got a thump too, but it’s as if it is being played on the in-built speakers of a cell phone, whereas the thump of the aftermarket exhausts sound as if that cell phone has been paired to a deep-bass JBL Bluetooth speaker. 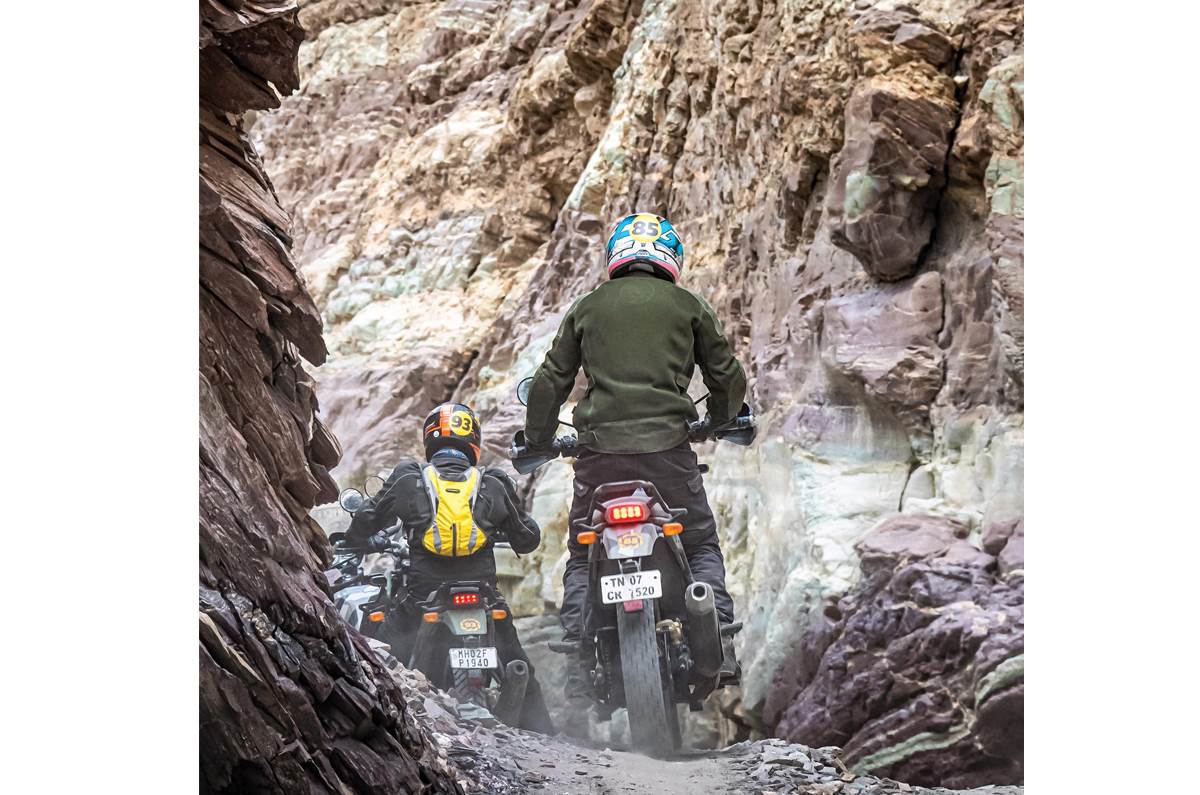 The route from Sirsir La to Wanla went through tall canyons and deep gorges.

The relatively new road cut through mountains is as yet very bucolic, with the soothing sound of the ice blue river gurgling alongside the road, and sometimes across the road, affording exciting water crossings. In these, momentum proves to be the best bet across. Those who lose momentum while in the middle of these water crossings often take a tumble or get their feet wet.

What really makes me happy to ride this route is the picturesqueness that’s abetted not only by the river but also the colour gradations in the high mountains through which the road runs.

The climb up to Singe La is steep and needs the correct use of torque and momentum. So around corners, I steadfastly keep off the clutch. It gets more difficult to do as the hairpin bends start turning into the spirals of a corkscrew with high incline angles. Yet, the Himalayan never flounders or baulks. The only time it does is when I take a shortcut I am advised not to and at the very crest, where the shortcut meets the road, the climb is so steep that the motorcycle stalls and gravity pulls us both, motorcycle and me, down in a heap. That is my second and last fall. 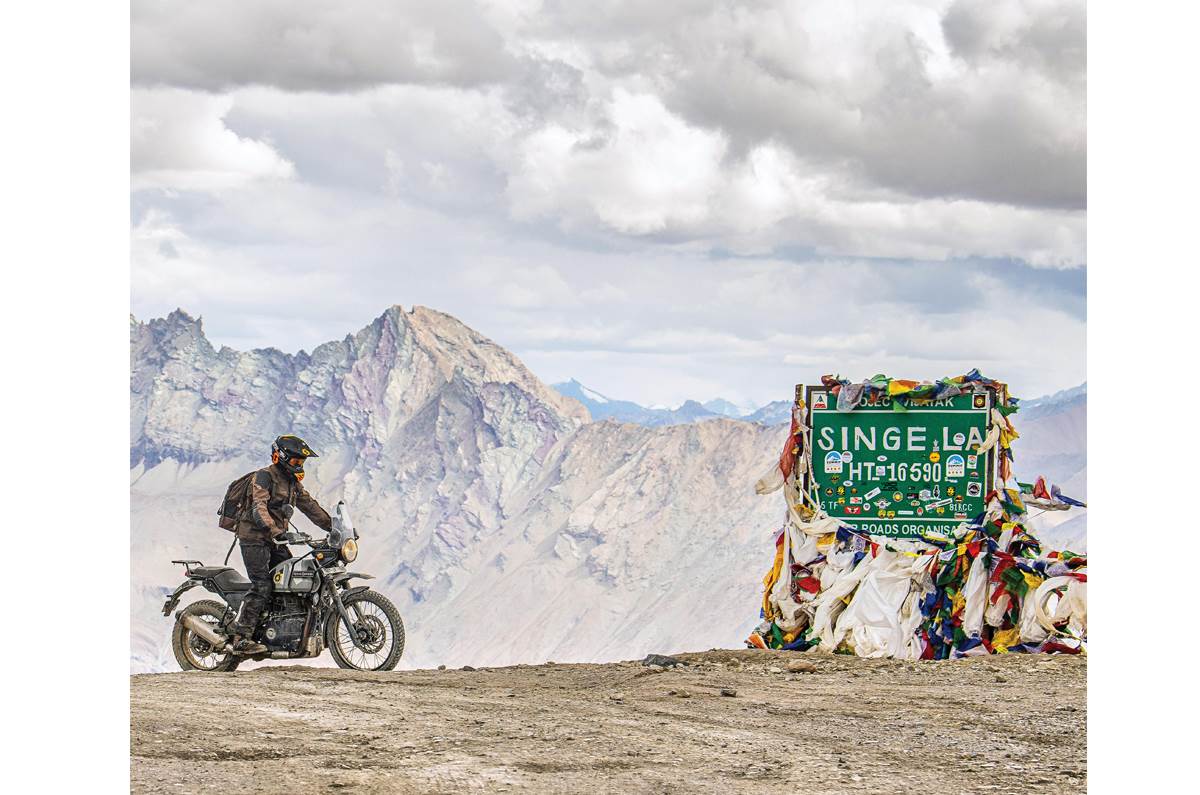 Nihal Raheja, the lead of the ride, approaches the crest of the Singe La

The climb to Sirsir La is easier, but it is after the descent that the best views come. The dirt track runs through tall canyons and gorges, with the hue of the rocks changing with the strength of the sun and the translucence of the clouds.

So much so that I am almost disappointed when the dirt ends, signalling the beginning of urbanity. From now on, it will be tarmac all the way over the 110km to Leh. My Pine Green also seems to pout at this and promptly shows displeasure with a puncture on the front tyre. I am somewhat shocked, because it happens on unbelievably smooth tarmac. But Vishnu arrives soon and swaps out the front wheel with a new one. And within 200 metres of riding, that one goes flat too. It’s like something out of a book by the Brothers Grimm. The wheel is once again swapped, and once I am out of earshot of Vishnu and the backup vehicle, I give the motorcycle a stern talking to, asking it to stop throwing tantrums and behave.

It does and I ride into Leh without incident, bringing the Astral Ride 2021 to a close.

What do you think about this Feature